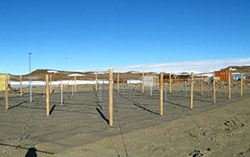 The Imaging RIOmeter system at Maitri operates at 38.2 MHz and is very similar to that at the South Pole by the Institute for Physical Science and Technology of the University of Maryland, U.S.A. The riometers have receiver boards of new design, timing is by GPS reception, and digitization is 12 bit instead of 8 bit. Except for improved lightning protection, the antennas, ground plane, and Butler matrix assembly are as in the original Maryland design. The output from the wide-beam instrument is used for quick-look purposes. The basic time resolution of the system is 1 s. The narrowest beam (zenithal) is 13 degrees wide between half-power points, and the best spatial resolution at 90 km (overhead) is about 20 km. The oblique beams are considerably wider. The system was installed at Matri during the year 2010 by IIG with the help of the University of Lancaster, England. This system is aligned geographically north-south.

Principle
A riometer is an instrument to measure atmospheric absorption developed in the 1950s. One of the first practical versions was developed at the University of Alaska Geophysical Institute in 1959 by C. G. Little and H. Leinbach, who also invented the acronym RIOMETER (Relative Ionospheric Opacity Meter using Extra Terrestrial Electromagnetic Radiation).
A riometer is a radio receiver connected to an antenna, which its beam is pointed at the sky. The radio receiver collects the natural radio noise produced by stars, planets (Jupiter in particular), and the sun [1]. The sky noise level varies throughout the day due to the earth rotation. This variation is known as The Sidereal Day (approximately 3 minutes and 56 seconds shorter than the solar day). Thus, we could expect to receive the same noise power in successive sidereal days. The daily variation of this noise power averaged during several days is called the Quiet Day Curve. By comparing the sky noise level at a given time to what we expect from the Quiet Day Curve, we can see if the ionosphere is blocking any of the sky noise. In other words an absorption phenomenon is taking place. The power of the received noise by a riometer operating at 38 MHz and using a reception bandwidth of approximately 300 kHz ranges from -120 dBm to -100 dBm. It signifies between 1e-15 watts and 1e-13 watts. With such a small signal any interfering noise or internally generated noise in the riometer can ruin the measurement. To avoid the first problem (external noise), riometers operate in a reserved frequency band for astronomic purposes; it is located around 38.2 MHz.
To deal with the second problem (internal noise), existing riometers avoid making an absolute measurement of the incoming signal. Instead, the received cosmic noise level is compared with the level of an internally generated noise of the same kind (Gaussian noise). The benefit of this technique known as “balancing technique” is that the output signal is referred directly to a precision internal noise source, and all other internally generated noises are eliminated in the process of comparison.